A downloadable game for Windows

Silence is a rhythm game that, as the title would suggest, has absolutely no sound in it. It's also a platformer, incidentally. Everything in the level that moves (besides you) moves to the beat of a silent song. To beat the game, you'll have to move to the rhythm of the platforms. Also, it could use some polishing, so my apologies for the weird, choppy platform movement and total lack of animations.

Silence was created as part of the GMTK 2018 game jam.

Note: you get more distance and height from a wall jump if you point away from the wall before you hit space.

Download the zip file. Extract it and run the .exe

Controls are also in the README

You should also submit it to Music Game Jam!
https://itch.io/jam/musicgamejam2018

I can hear the music even though it isn't there I swear. Anyways, I'm not sure if it's how high the jump is or if I just suck, but it's kinda tricky to jump to the beat. Agree with Syllabus that adding a ghosting image can make it easier to anticipate where the blocks will appear. Other than that, really interesting idea!

Interesting idea. I would have added a fading ghost image of where the platform was every time one moves though. With the camera moving and everything just jumping to it's next position, it's a little tough to tell exactly what's going on; especially at the speed you are meant to play the game at.

The jump time being almost exactly the same as the platform change time made the game a bit to tough for me so I didn't make it very far.

The game controls pretty well which is really important in something like this. It's always nice when I'm failing because I'm bad and the game is tough instead dieing from loose controls.

Anyway, interesting game. Thanks for making it. 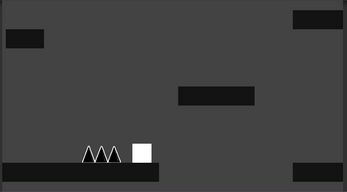